Skeet League - held on Tuesday evenings on the skeet field.  Start time is around 4:30 p.m. Arrangements may be made to shoot on Thursday nights or Saturday afternoons.

The 2013 league starts June 25th and runs until Sept 10, followed by a dinner for participants. (See calendar for dates.) The league is open to non members, and a member must be present for non members to participate. The cost is $20.00 for the league plus the cost of targets $3.50 per round.

There is a newly imposed Club usage fee of $3.00 per day for non-members to use the Club facilities. We will have to collect this fee each day a non-member shoots. 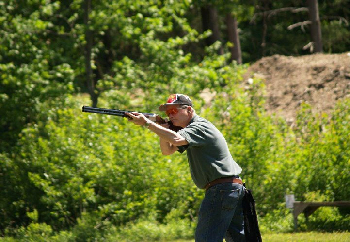 Normal skeet rules as published by the NSSA are in effect. Also, if you are participating in the league, no practice rounds are allowed on the evenings you shoot.

All range rules are in effect, including eye and ear protection.

Current scores for the League are here...

How the game's played:

Skeet is a game of angles and mathematical formulas involving time, speed and distance, which translate into the necessity of shooting a certain distance ahead of each target so that shot string and target meet physically somewhere along the target's flight path, resulting in a "dead" bird.

This is known as lead, and the apparent lead necessary for breaking each target changes by some amount from station to station because the shooting distances and angles change.

And that's the challenge of the game, but more on that shortly...

At its most basic, a round of Skeet involves one box of 25 shotgun shells per shooter, which will be fired at eight stations, the usually concrete pads on which each shooter stands to take his turn. Normally, no more than five shooters, called a squad, are involved in a single round of skeet at one time.

Target shooting sequences at each station:

Station 8: High House single, shot first; Low House single. If by now the shooter has missed no targets, the 25th shot is taken at the Low House.

Optional shot: This, which would be the 25th shell for a shooter who has missed no shots through Station 8, is taken for a second try at the first target missed at any station.

NOTE: that at every station the High House shot is taken first except on doubles at Stations 6 and 7, when you shoot the Low House target before the High House. Just remember that and you won't get confused over which house to shoot first.